Everywhere we look, especially if we crane our necks upwards, birds of all colors and sizes surround us! Even in the winter.  Both above our heads and at our feet, these transboundary ambassadors remind us of their need – and our need – for clean water and for coordinated upstream-downstream stewardship of our rivers. Like canaries in the coal mine, they warn of the many growing threats that face both them – and the health of our natural freshwater supplies: 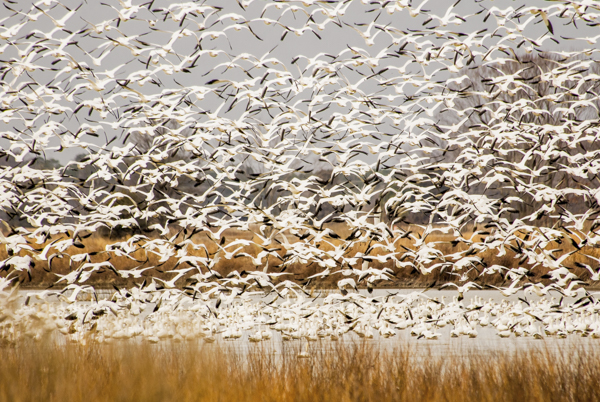 No matter what the weather – Audubon will conduct its 119thannual Christmas Bird Count (Dec 15 to Jan 6) to determine bird species and, just as importantly, their numbers in over 2,000 locations. This event began on Christmas Day in 1900. Frank Chapman, a renowned ornithologist at the American Museum of Natural History, proposed a new and lasting holiday tradition. He suggested an end-of-the-year census to count birds, instead of hunting birds during the Christmas holidays. That year, a dedicated group of enthusiastic birders gathered and became inspiration for many others in following years. Now, each year, tens of thousands turn out for the Audubon Christmas Bird Count to contribute to conservation as well as the health and populations of birds. 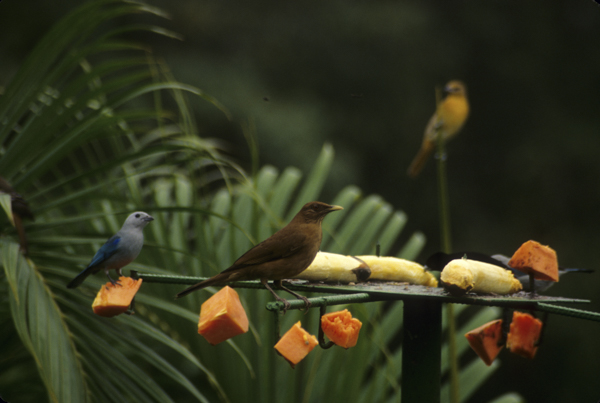 Whether holding well-worn, snow-dusted binoculars in cozy mittens, or scanning skies with sunglasses and billed caps in warmer zones, volunteers spot birds within 15-mile-wide circles across North and Latin America and in the Caribbean and Pacific Islands.2 This way, “citizen science” monitors overall bird totals year by year, creating comparisons and helping account for the status of bird species. Those involved hail it as a favorite festive occasion that is great for families and even those who don’t bird-watch otherwise.

Beginning this weekend, legions of volunteers will turn in their avian photos – whether amateur or professional photographers –  and share their chicken-scratched totals of wetlands, waterway, plains, forest and coastal sightings of birds from wrens to snowy owls; from road-runners to our beloved bald eagle. 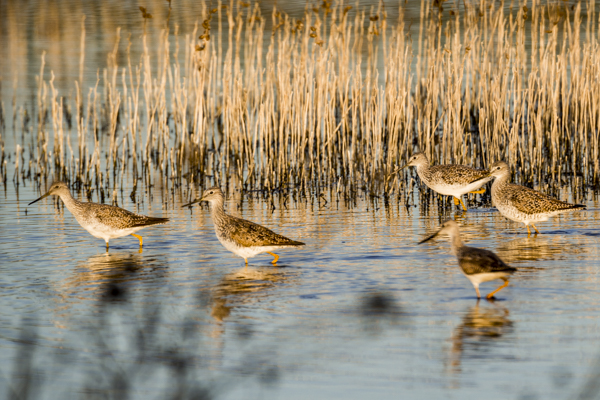 Use your cell phone camera, meet neighbors and enjoy the scenery in your watershed!  Just email the Audubon compiler in your area by clicking on Audubon’s Bird Count map. That’s all you have to do to join a “circle.” For instance, in New York City’s Central Park, birders arrive in the morning (some meeting at dawn). They then divide into quadrants to canvass Central Park’s 843 acres. Instructions are given to avoid duplicate sightings that would cause over-counting.  For instance, with raptors such as red-tail hawks, counters note the time of viewing and its flight direction. Several hours later, all participants meet to report sightings and share lunch. Excitement reigns, particularly when a rare bird has been sighted. 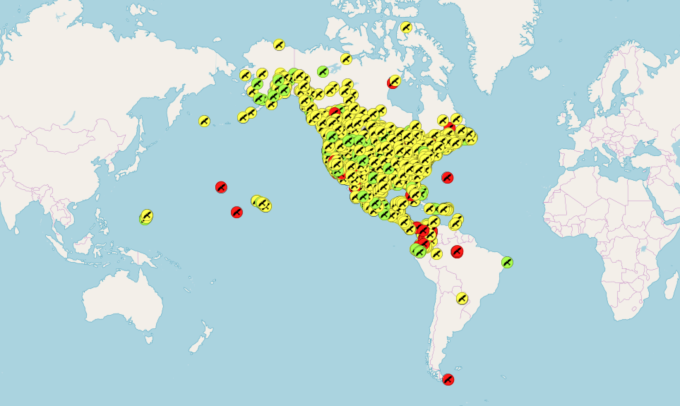 This map represents the coverage by Audubon’s Christmas Bird Count

Anecdotal reports of bird populations moving north have coincided with Audubon’s Christmas Bird Count specific results. Per a 2009 report, Audubon focused on 305 species “regularly encountered in five or more states or provinces to assess changes in the range of North American birds. Identified range changes are based upon movement in the centers of abundance for each of the 305 species – half the individuals of a species are found south of the center of abundance; the other half are found north.” 1

It’s tempting to conclude that global warming and climate change cause these northward movements; however while probably, that is not provable. Yet changes in patterns of the migratory and over-wintering population do suggest and corroborate many recorded changes in our environment.  As well, the presence, or lack thereof, of certain bird populations are critical indicators of conditions in our watershed ecosystems. The Audubon databank, begun in 1966 and expanded yearly by citizen scientists, has become the longest-running repository of bird population statistics, and thus an invaluable resource in conservation. 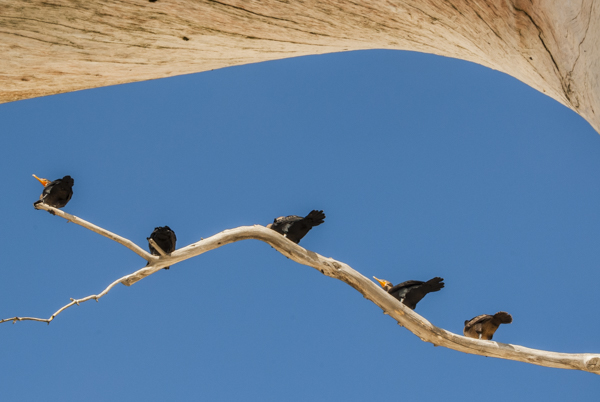 In 2009 Audubon reported, “Analysis of four decades of Christmas Bird Count observations reveal that birds seen in North America during the first weeks of winter have moved dramatically northward – toward colder latitudes – over the past four decades.  Significant northward movement occurred among 585 of the observed species:  177 of 305.  More than 60 moved in excess of 100 miles north, while the average distance moved by all studied species – including those that did not reflect the trend – was 35 miles northward.”1

WHY RECORD and PROTECT BIRD HABITATS?

We must heed the many wider implications of Audubon’s note threats to birds, such as the following that affect waterfowl and grassland species, in particular.

RE WATERFOWL: In 2009, the red-breasted merganser moved 317 miles north, the American black duck 182 miles north, and the green-winged teal 157 miles north. Audubon data shows that 52% of water-bird species were found further north, possibly due to recent decreases in ice cover in northern climes.  The flip side of this benefit is that these warmer temperatures will dry out wetlands, which offers critical water-bird habitat.1 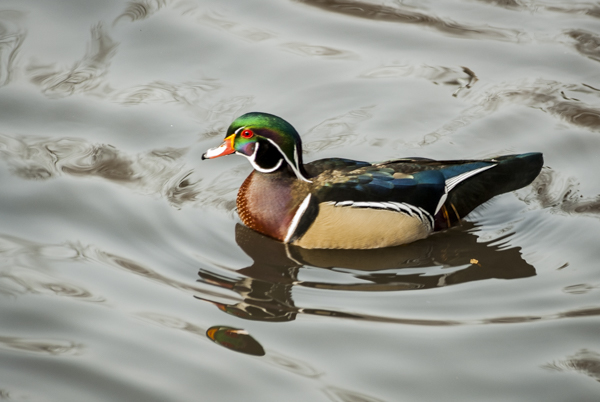 RE GRASSLAND BIRDS: Especially in the Mississippi River Basin plains, only 38% of grassland species such as meadowlarks, sparrows and burrowing owls, had moved northward by 2009, while an almost equal number actually moved south.  The supposition is that the take-over of varied prairie species by extensive fields of agricultural mono-crops has reduced their habitat.1 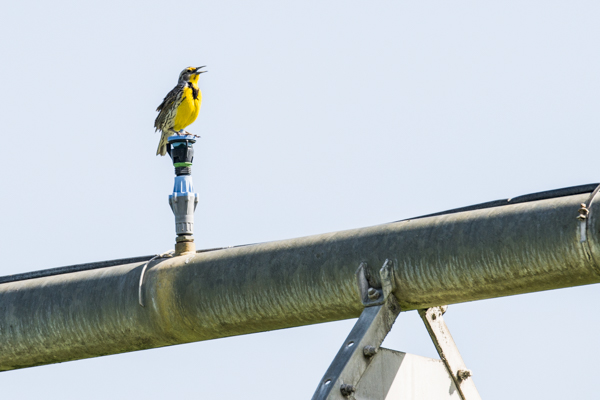 As the Audubon report notes, “Carefully planned, science-based habitat conservation efforts will be increasingly essential to avoid a growing toll on birds and wildlife, along with the loss of a wide array of ecological benefits, from clean water supplies, and the insect control and seed distribution provided by birds, to travel and tourism revenues.”1   For instance, the 2009 highs for fossil-fuel emissions in the range for yellow-billed magpies was at 75%; for California gnatcatchers 55% and grasshopper sparrow 52%.

AT NATIONAL & GLOBAL LEVELS: We should note and protect vulnerable bird habitats, as well as their migratory corridors and flyways. Such bird habitats and paths often follow large waterways, such as the Mississippi River and California’s endangered San Joaquin River. Thus, addressing climate change and including assistance for ecosystem resilience, conservation plans, land acquisition for National Wildlife Refuges, and support the Clean Water Act will help keeps water pure for birds, other species and ourselves. 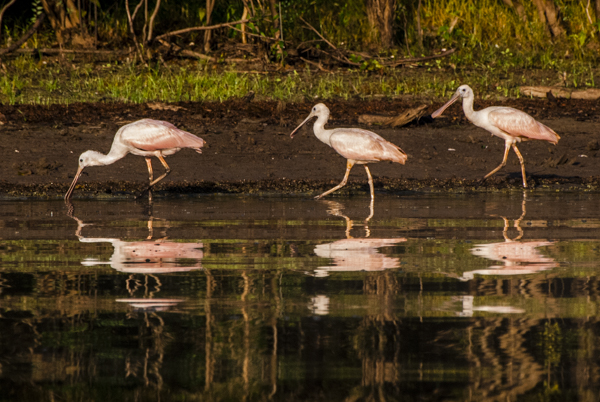 IN OUR BACKYARDS: We can provide snacks for our hungry birds via filling feeders year-round and planting gardens that bloom and then set seeds to fall in succession from spring to fall.  It is helpful to birds to plant their “buffet” in clusters and to use native-plant species. Caterpillars and grasshoppers should be protected, for they are favored entrees for adult birds.  To bring more birds to your garden, learn what native plants Audubon recommends for your area.3

Protecting and observing the birds that bring us joy during December holidays – and all year long – will protect our own environments and our health. Furthermore, birds contribute to our fiscal well-being. US Fish and Wildlife Service estimates that birding activities and related income adds $85 billion to America’s economy. Happy birding!

How to tell a Raven from a Crow  (or, as taught to the author by her daughter: A raven’s tail is V-shaped, like the middle letter in “raven” – versus a crow’s tail which is rounded like the vowel O in “crow!”)

1 Birds and Climate Change:  Ecological Disruption in Motion. A Briefing for Policymakers and Concerned Citizens on Audubon’s Analyses of North American Bird Movements in the face of Global Warming.  Audubon, Feb 2009.

2 The Audubon Christmas Bird Count was expanded to Latin America in 1972.

3 Jones, Benji.  The Buzz About Bemidji: In the North Woods of Minnesota. Audubon Magazine, Spring 2018, page 17.

Published by No Water No Life

No Water No Life® is an LLC project founded in 2006 to raise awareness of the values and vulnerability of our freshwater resources, plus solutions to their sustainable management. NWNL Director and lead photographer Alison M Jones is Sr Fellow of International League of Conservation Photographers and International League of Conservation Writers, a Fellow of The Explorers Club, and member of North American Nature Photography Assoc., Society of Environmental Journalists, Tewksbury Land Trust Board (NJ), and other related organizations. While NWNL hosts bloggers from all over the world, and especially NextGen student bloggers, their opinions do not necessarily represent the views of NWNL. View all posts by No Water No Life