As NWNL plans its website redo (to launch this fall), we envision “Buzz Numbers” on the home page.  What?  Well, “Buzz Numbers,” are our Project Manager Sarah’s take-off on “buzz words.”  Just another great tool to quickly project complex concepts.  So, while in that mode, here’s a NWNL BLOG with 0 references to specific watersheds and just 1 URL link. The Buzz Numbers below refer to values of, or impacts on, all rivers and streams in the Americas or East Africa, the 2 regions where NWNL case-study watersheds are located.

BUZZ NUMBERS for The Americas

Projections for 2050 in the Americas 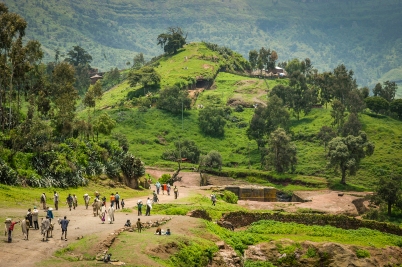 Villagers in Lalibela, Ethiopia with erosion in foreground, 2004

All our Buzz Number stats come from the Appendix of an ISPBES Intergovernmental Science-Policy Platform on Biodiversity and Ecosystem Services March 2018 Report, sponsored by UN.

Published by No Water No Life

No Water No Life® is an LLC project founded in 2006 to raise awareness of the values and vulnerability of our freshwater resources, plus solutions to their sustainable management. NWNL Director and lead photographer Alison M Jones is Sr Fellow of International League of Conservation Photographers and International League of Conservation Writers, a Fellow of The Explorers Club, and member of North American Nature Photography Assoc., Society of Environmental Journalists, Tewksbury Land Trust Board (NJ), and other related organizations. While NWNL hosts bloggers from all over the world, and especially NextGen student bloggers, their opinions do not necessarily represent the views of NWNL. View all posts by No Water No Life